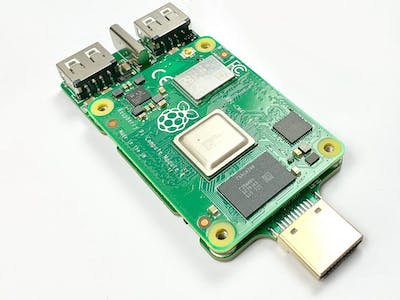 The high computing performance of the Raspberry Pi 4 combined with its native HDMI output makes it a perfect choice for applications involving a television. They have become a favorite among Kodi and RetroPie users. However, the form factor does make them slightly inconvenient to hide behind a TV! A carrier board designed by MBS solves that issue by turning a Pi CM4 into an all-in-one TV Stick.

The CM4, or Compute Module 4, is a physically compact version of the Raspberry Pi 4. A CM4 incorporates the same quad-core SoC as the full-size Pi4. For storage, there are variants with difference sized eMMC Flash memory chips. Radios for WiFi and Bluetooth are optional. And RAM comes in a variety of sizes, from 1GB to 8GB.

One reason compute modules are so small is because they lack industry standard connections. Instead, they feature high-density connectors so that you can attach them to an application-specific carrier board, such as the CM4 TV Stick.

In this case, the carrier adds the HDMI plug, a USB-C connector, two USB 2.0 connectors, 14 GPIOs, and an IR receiver. A microSD card also means the carrier is compatible with CM4 modules that come with or without an eMMC chip.

The CM4 and board weigh 46 grams, roughly the same as two AA (LR6) batteries, which does seem like a bit much to hang on an HDMI port.

Looking forward, MBS reported a successful test of receiving IR signals (remote control) even while the receiver “hides” behind a TV! The final board design may also have support for Ambilights.

At the time of writing, there are few details on the design of the carrier. However, MBS appears to be active on the Raspberry Pi CM4 TV Stick’s project page. Where it seems these could be available for sale as early as September.