There was lots of excitement when BeagleV Starlight single board computer was announced in January of this year. With a price tag of $119 and up, it promises to be an affordable RISC-V SBC with StarFive JH7100 dual-core SiFive U74 Vision SoC with AI accelerator, H.265/H.264 hardware video decoding, up to 8GB RAM, HDMI output, Gigabit Ethernet, and so on.

Several beta testers even received BeagleV Startlight prototypes, providing instructions for buildroot, boot Linux, or even a video review with Fedora.  The first version lacked a GPU, and the initial schedule planned for a new revision with an Imagination GPU to be manufactured in September. 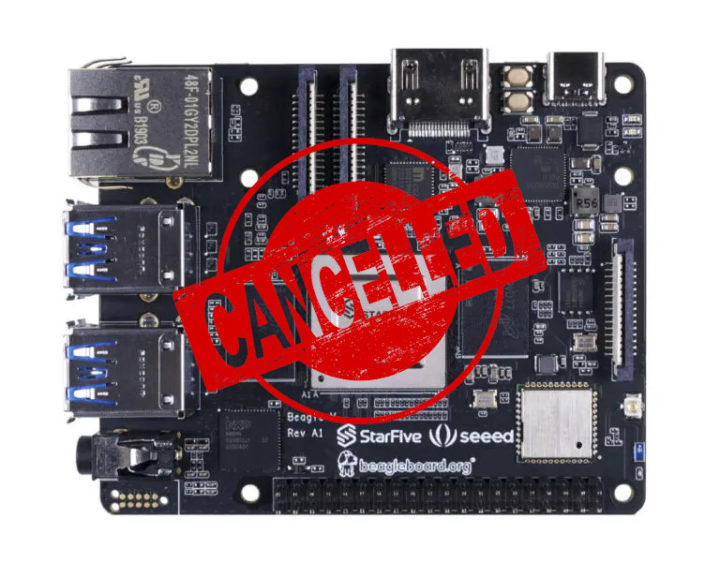 But there have been some changes, as BeagleV Starlight SBC will not go into mass production, but not all is lost, as the Foundation and Seeed Studio are working on a new BeagleV community board slated to be released in Q1 2022.

Drew Fustini made the announcement on Beagleboard.org forums:

BeagleV™ is a developing community from BeagleBoard.org Foundation. BeagleV community goal is to support Open Source Hardware boards with the possibilities of the open RISC-V instruction set. This site is where software and hardware developers can communicate about what’s happening at the intersection of Open Source Hardware and RISC-V. We plan to present the BeagleV™ community with sample reference boards to test and suggest changes. Our recent beta development program with the BeagleV™-Starlight prototype is one example.

The prototypes presented to the BeagleV™ community may have the possibility to go to production or they may just be used by the community for education and as targets to further RISC-V software developments. The BeagleV™-Starlight prototype will not be going into mass production, but we are continuing to work on board designs with other RISC-V SoCs. BeagleBoard.org® and Seeed Studio hope to have a new BeagleV™ community board available early Q1.

The Wiki on Seeed Studio now returns a 404 page, and the official BeagleV website mostly points to the announcement above.

There’s no exact explanation as to why it was decided not to mass-produce this particular version of the board. It could be supply issues combined with the GPU implementation possibly taking more time. Another reason could be JH7110 processor itself not going into production, but we just don’t know.