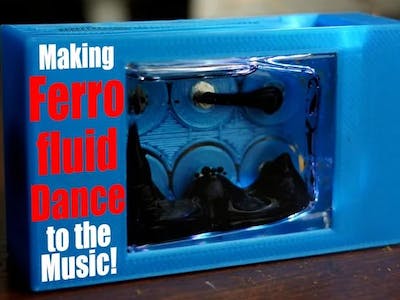 As shown in GreatScott!’s latest video, you can buy a flask with magnetic-reactive ferrofluid from a variety of online retailers. This liquid can then be manipulated via a permanent magnet, which is quite interesting for a short time. To make things more fun, he decided to take the next logical step, and manipulate the fluid automatically. His rig uses a series of six electromagnets that cause it to dance to music as a sort of magnetic VU meter.

The device is powered by an Arduino Nano board, along with an MSGEQ7IC that breaks out sound frequency intensity into seven zones. With this data, the Nano controls each electromagnet according to the music input via MOSFET drivers. It utilizes physically lower and higher magnets to distinguish between more and less intense sounds in low, mid, and high zones. Additionally, a small strip of addressable LEDs is used to add a lighting effect to the device.

The fluid flask sits inside a 3D-printed holder for it and the electromagnets, and is augmented for a bit more of the black magnetic goo for a better effect. One issue here was that the smaller magnets that physically fit the flask didn’t provide enough attraction, so GreatScott! re-engineered the these units with a new iron core and a longer length. It looks great dancing at around 10:15 in the video below, though you’ll need to build it yourself to rock out to the copyrighted music of your choosing!