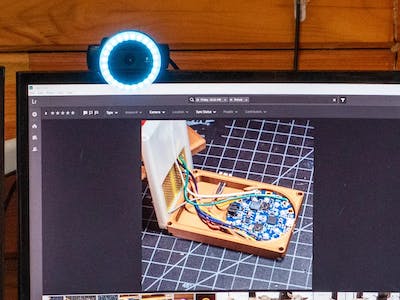 By now you’ve probably had to take a meeting or two using Skype / Zoom / Google and while you are of course always properly groomed and clothed, perhaps your office lighting leaves something to be desired. A ring light could be just the thing to help with this, forming a halo of luminescence directly around your webcam. Although you could purchase something that will probably work well, making one like this device by Andrew David Thaler of Southern Fried Science would be much more fun.

Thaler freely admits that is model is neither cheaper, nor better than a commercial device (in the conventional sense at least), however it does allow you to independently control each color channel for a rather wide range of effects. Additionally, it features a panic button that can make it appear that you’re being pulled over by the police, potentially as a great way to end a call.

The system is based on Adafruit’s Circuit Playground Bluefruit board. (📷: Andrew David Thaler)

An Adafruit RGBW NeoPixel ring serves as lighting for the unit, which in turn is controlled by a Circuit Playground Bluefruit board with an nRF2840 Cortex-M4 processor and BLE connectivity. User interface consists of four potentiometer sliders along with the button. While not used here, the Bluetooth capabilities could also be used if you want to “go wild and make an app-controlled ring light.”

Code for the project is available on GitHub, and you can find the print files on Thingiverse.

This Robot Bops Its Owner When They Slouch