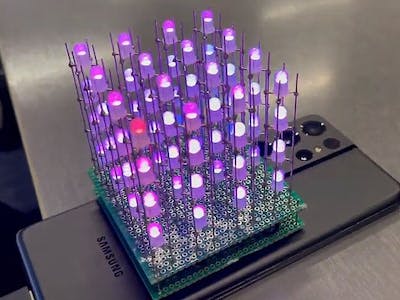 “It’s simply a 4x4x4 RGB LED cube (aka ‘Charlie cube’) running on an Arduino Nano,” Ray explains of the project, “and is fully powered by a Qi wireless charging receiver. It doesn’t use any batteries since the cube uses less than 5W of power, and the Samsung [Galaxy] S21 Ultra phone can conveniently reverse charge up to 5W.”

“I will probably change the coil design in the future for more functional accessories that use wireless charging. I’ve made copper coils in past projects and I think making channels (CNC or laser engraved) for the wire to follow will be ideal, and use some math to determine the specifications of the coil to provide the required power.”

More details are available in Ray’s Reddit thread on the project.

Think You Can Keep Up with This AI?

51 thoughts on “This 4x4x4 LED Cube Needs No Wires, Drawing Power From a Smartphone Over Qi Wireless Charging”