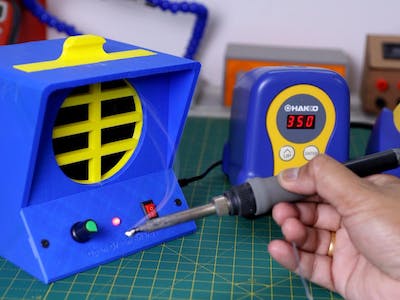 If you’ve done any amount of soldering, you’ve likely been annoyed by fumes from solder and flux that seem to be automatically attracted to your face. Smelly and potentially toxic, it’s best to route these fumes elsewhere, preferably through a filter of some sort to keep them from simply annoying someone else.

You can, of course, purchase a fume extractor; however, good units can cost upwards of $70, so why not build one yourself? In the video below, Open Green Energy demonstrates how to do just that, using 3D-printed components made with blue and yellow filament to match up with his Hakko soldering station.

Inside the nicely printed frame, a 120mm fan provides suction and a removable carbon filter cuts down on fumes exiting the back. A speed controller is used to modify fan levels, with the control potentiometer removed and mounted to be accessible from the outside. Finally, an LED with a resistor is hooked up to the switched 12V fan power input line to indicate whether or not the unit is active.

More specifics on the project are available via Open Green Energy’s write-up and print files can be found on Thingiverse. Inspiration for the model came from rdmmkr’s smaller fume extractor, which presents another good option if you’d rather have a more compact device with not speed control.

This “Cyborg Beetle,” Wearing a Texas Instruments CC2431 “Backpack,” Can Be Remotely Controlled