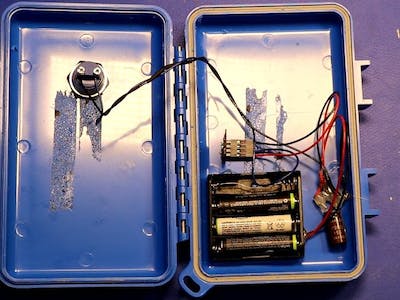 Dr. Scott M. Baker has shown off a Wi-Fi connected button, powered by an Espressif ESP8266 microcontroller, which has only one purpose in life: to trigger a garden sprinkler system.

“The way the pipes are configured for the sprinkler system, there’s a master valve in front of the yard hydrant that I use for my garden hose (there are reasons for this, but they are due to plumbing, not due to electronics!),” Baker writes of the project. “I have a RainMachine smart sprinkler system controller, so I can easily trigger the master valve from my phone or iPad.”

“However, I don’t always have my phone on me, and it’s an extra step to open up some app and login just to be able to turn on a faucet. So, I put together this ESP8266-based remote control.”

To avoid the need for mains electricity, Baker turned to a trio of AAA batteries which run through a Microchip MCP1700-3302E low drop-out regulator. A physical button, meanwhile, interrupts the ESP8266 from its deep sleep mode — which keeps energy consumption to a bare minimum when the device isn’t in use.

“No custom pcboards here. I assembled the regulator and its capacitors by soldering the components and wires together,” Baker explains of the physical side of the project. “Then I gunked them up good with the hot melt glue gun.”

Baker has published the source code and a schematic for anyone looking to follow in his footsteps. (📷: Dr. Scott M. Baker)

“The battery holder came from Amazon — it’s a quad AAA holder with one of the slots wired across. The button also came from Amazon, the result of a search for ‘waterproof button’ (which I’m not entirely convinced is waterproof; we’ll see). The blue case is an ‘S3 T2000 Watertight Case,’ which I’ve used in a few previous projects.”

Baker’s full write-up is available on his website, while the project source code has been published to GitHub under an unspecified open source license.

A Satellite Upconverter Need Not Be Impossible To Make

British Big Rigs Are About To Go Green