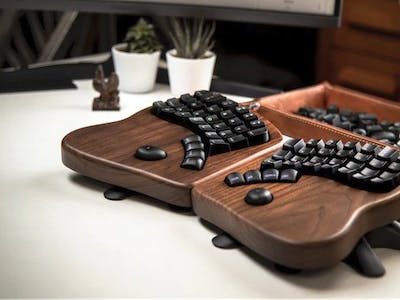 Open keyboard specialist Keyboardio has launched a crowdfunding campaign for the Model 100, its follow-up to the popular Model 01 — and has already smashed past its funding goal, a mere 20 minutes after the campaign went live.

Keyboardio launched its first product, a commercialised version of Phil Hagelberg’s 2012 open hardware keyboard design dubbed the Model 01, back in 2015 to massive success: The split design, which saw mechanical switches housed in a hardwood body under custom-sculpted key-caps, raised over $652,000.

The Model 01 was followed by the Keyboardio Atreus, a minimalistic ultra-compact keyboard with just 44 keys and customizable function layers. Like the Model 01, the Atreus was based around an open source firmware running on a Microchip ATmega32U4, but targeted those who needed portability — though, sadly, without adding any wireless connectivity alongside the USB Type-C connector.

Now, the company is back with the Model 100 — an updated, upgraded successor to the Model 01 which brings back the hefty wooden casing.

“For the past year and a half, we’ve been working to reengineer and upgrade every aspect of the Model 01. The Keyboardio Model 100 is the culmination of that work,” Keyboardio’s Jesse Vincent explains. “The Model 100 features 64 hot-swappable mechanical key switches, individually addressable RGB LEDs under each custom-sculpted key-cap, and open source firmware, all housed in a precision-milled hardwood enclosure.”

“The Model 100 retains the Model 01’s distinctive butterfly design, but includes dozens of improvements across every aspect of the product. We’ve introduced hot-swappable MX-compatible key switches. We’ve rebuilt the key-caps to be thicker, and more satisfying. We’ve reinforced the baseplates and made the octo-stands easier to adjust. We’ve completely overhauled the electronics to be more reliable and maintainable. The Model 100 is a true reinvention of the Model 01 you know and love.”

The revised design includes the choice of walnut or maple for the chassis, thicker key-caps, full per-key RGB lighting, and a circuit board which accepts hot-swap Cherry MX mechanical key switches — allowing anyone displeased with the offer of Kailh Box White clicky, Box Silent Brown tactile, or Box Silent Pink linear switches the ability to swap them out for their own without ever having to pick up a soldering iron.

Backers get the keyboard, two interconnection cables and bars, a USB Type-C cable, “octo-stand” feet, and a screwdriver. (📷: Keyboardio)

The open source firmware offers flexibility, too. “With just a few lines of code, you can completely customize the light show,” Vincent explains of the per-key lighting. “Want your keyboard to start flashing red when you’ve been typing too long? There’s a plugin for that! Want a key to light up when you’ve got mail? That’s just a few lines of code.”

The campaign, which reached its funding goal just 20 minutes after launch, is now running on Kickstarter with physical rewards starting at $289 for a Model 100 with cables, interconnect bars, “octo-stand” adjustable feet, and a multi-bit screwdriver.

Those eager to get their keyboard ahead of the planned January 2022 shipping, meanwhile, can pay the same for an early production run scheduled for release in November this year — but won’t be able to choose the wood or switch type.

This Game Boy Cartridge Has Its Own OLED Screen

Estefannie, Look Mum No Computer Partner on a Machine to Turn Cryptocurrency Into Music