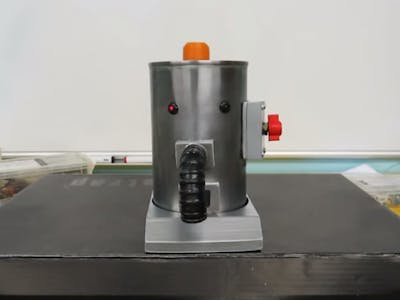 Season 2 of That Mitchell and Webb Look, a British sketch comedy TV show, featured a skit in which a chef loses his ability to smell after a mugger punches in him the face. Without a way to smell, the chef is no longer able to cook palatable food and loses his job. But thanks to his past as a roboticist, he is able to build a robot called Cheesoid that can smell for him. Unfortunately, the robot isn’t able to differentiate between cheese and petrol. Andy thought he could achieve better results and built a small desktop version of the Cheesoid robot to prove it.

In the original skit, the chef ends up attaching a toggle switch to the robot with two positions: cheese and petrol. If the switch is set to cheese, then the robot will announce “cheese” out loud whenever it smells anything. The gag, of course, is that the chef is flipping the switch depending on what he wants Cheesoid to smell, rendering the robot useless. Andy’s desktop Cheesoid is able to actually smell — at least to a limited degree. The robot has an SGX Sensortech MiCS5524 gas sensor that responds to alcohol, carbon monoxide, and other gases. It can’t recognize cheese, but it can sense petrol.

A Seeed Studio XIAO development board monitors the gas sensor, which produces voltage proportional to the concentration of detectable gases. The robot can drive around using two small stepper motors with gearboxes. An SD card stores audio files that play through a Pmod AMP2 class-D amplifier module. Those components attach to 3D-printed mounts inside of the robot’s coffee can body enclosure. In keeping with the skit, it doesn’t matter what this miniature Cheesoid actually smells; if it detects anything, it will loudly proclaim “cheese!” It’s a silly project, but so was the skit that inspired it.

This Cheap Robot Tastes COVID-19 Variants in Your Spit

Mothra Is an Acoustics Laboratory on a Stick