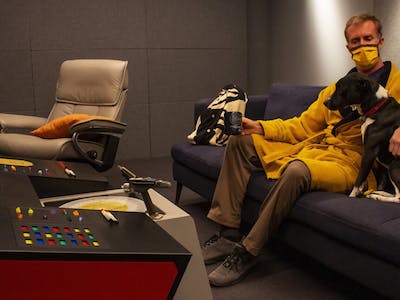 Few works of fiction have inspired more geeks than Star Trek. Thousands of Trekkies have taught themselves Klingon. Many scientists, including astronomers, developed an interest in their field because of Star Trek. Several real-life inventions are very similar to fictional technology seen in episodes of the show. And, of course, makers love to create replica props and cosplay as Star Trek characters. Rich Batcheller is not a Trekkie himself, but his company, Blackmouth Design, received a contract from a diehard fan to build something special. The result is this USS Enterprise Navigation Helm that serves as a media room control panel.

This is a recreation of the navigation helm operated by Captain Sulu, portrayed by the legendary George Takei, in the original Star Trektelevision series. While it isn’t a perfect replica, as some compromises had to be made for usability, it is very close to the navigation helm that was on set. But instead of helping the Enterprise safely navigate through Klingon space, this is a piece of functional decor. It is a coffee table, a toy, and a media controller all rolled into one neat package. With this, the client can feel like he’s actually aboard the Enterprise while he watches his favorite Star Trek movies and TV shows.

Batcheller only provided a high-level overview of this piece’s functionality, but we do know that an Arduino is responsible for much of its capability. It controls the various lights, screens, and sound effects. A total of 16 rocker switches cover the helm and activate sounds like photon torpedoes, red alerts, and the Astrogator. The structure of the helm seems to have been constructed from plywood, with a liberal amount of automotive body filler smoothing out the seams. Batcheller placed the various lights and switches as accurately as possible to mirror the “real” helm. With a screen-accurate coat of paint, it looks perfect. We can only assume that the client was ecstatic when this piece arrived at his home.

Never Miss Another Arrow with This Autonomous Robotic Archer

This Arduino project is counting to a billion