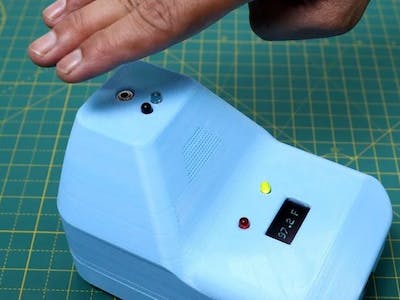 With the COVID-19 pandemic raging on, especially now in places like India, having access to diagnostic measures is more important than ever to prevent the disease from spreading even further. The solutions that are created must be both cheap and accurate, which can be tough to achieve simultaneously. That’s where this project by Open Green Energy excels, as it combines readily-available components with open source design into a portable contactless thermometer.

The heart of the DIY contactless thermometer is an Arduino Nano, and it communicates with a GY-906 module to read a surface’s temperature. There’s also a .96″ OLED display that shows information about what the sensor is measuring. If the subject’s temperature is too high, the thermometer’s buzzer will activate to alert others.

How the temperature sensor works

Humans are warm-blooded, and that warmth means we emit invisible radiation in the form of infrared light. The MLX90614 sensor (what the GY-906 uses) has a lens on the front that takes the incoming light and focuses it onto a series of thermocouples known as a thermopile where it gets converted into heat/electricity. By measuring the voltage produced, the temperature can be calculated and then outputted. In this case, the GY-906 has an I2C interface to transmit the information to a host device.

Designing a PCB and enclosure

Projects that involve this many components are normally quite large, so being able to shrink them down is vital for portability. The PCB is laid out such that the Arduino Nano is at the center, along with the MT3068 module for charging the batteries. There are connectors along three of the sides for various status LEDs and the sensor/display modules. Finally, there’s a place for a screw block terminal for incoming power.

The enclosure for this project is entirely 3D-printed in PLA plastic, which makes it both easy to print and strong enough for everyday use. The unit’s base contains a pair of 18650 rechargeable batteries, as well as a holder for them. On top of that is the PCB, and finally, the upper portion of the enclosure houses the OLED, LEDs, and the temperature sensor.

The software for this contactless thermometer project is comprised of a simple loop that simply checks if a person is standing in front. If so, the Arduino Nano gets the current temperature from the sensor via a library and then displays it on the screen. If the value is above the threshold for a normal temperature, the red LED turns on and the buzzer activates.

Seeing how well it works

After completing the software and enclosure, Open Green Energy then wanted to test it. As expected, the device was able to accurately measure and display his forehead’s temperature on the OLED. He also held up a hot soldering iron to test the buzzer, and it too functioned correctly.

You can read more information about the thermometer here on Instructables.

Even Xzibit Would Appreciate This Pimped Out, Liquid-Cooled $18K Oscilloscope