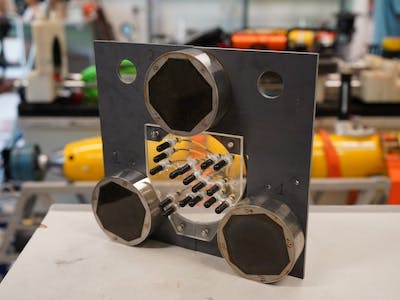 Sonar technologies have long been crucially important in the field of underwater exploration and navigation. The use of sound waves to detect and locate objects underwater has proven to be a reliable and efficient method of gathering information in an otherwise inaccessible environment, where electromagnetic waves cannot travel far.

One of the most important applications of sonar technology is in naval defense. Submarines, ships, and other underwater vessels use sonar to detect other vessels and underwater structures, allowing them to navigate safely and avoid collisions. Additionally, sonar can be used to detect and locate underwater mines, making it an essential tool for mine countermeasures.

Sonar technology has also been used in the field of oceanography. Scientists use sonar to study the behavior of marine life, map the ocean floor, and monitor ocean currents. This information is essential for understanding the Earth’s climate and predicting natural disasters such as tsunamis.

Despite their utility, underwater imaging sonars are, for many applications, not a reasonable option due to their bulk and hefty price tags. These barriers may become a thing of the past sooner rather than later, however, thanks to recent efforts by researchers at the National University of Singapore. They have developed a small, dolphin-inspired sonar device that uses a new echo processing algorithm to produce a clearer picture than was possible in the past. The device emits dolphin-like signals, repeatedly interrogates objects via multiple sonar clicks, and uses several transmitter locations to examine targets from different angles.

It has been observed that dolphins are capable of reconstructing the shape of underwater objects using sonar. Through a series of experiments, the team was able to analyze the echoes received by dolphins as they interrogate objects to understand their shapes, then replicate those signals using a biomimetic sonar that they developed. This device is much smaller and less expensive than existing devices, and only requires a set of three transmitters.

To make the most of this new hardware, the researchers developed a novel processing algorithm that has proved to yield clearer visualizations than were seen with previous methods. Working under the belief that dolphins make use of prior information to make sense of their own echoes, they incorporated prior information into their algorithm – specifically regarding the sparsity of the shapes under observation.

The research team with their invention (📷: National University of Singapore)

When putting conventional approaches up against the team’s new methods, it was discovered that the new techniques could produce much clearer images from sonar signals. And that enhanced resolution was also achievable more quickly than in the past. As few as three clicks from the sonar device were shown to produce relatively clear representations of objects.

The compact biomimetic sonar device described in this work has proven to be able to visualize shapes and discriminate between underwater objects. The developers believe that their system could be of use in underwater sensing, or identification of features for navigation. They also note that the small form factor of the hardware is well suited for deployment on small underwater vehicles, which may open up new avenues for a next-generation of oceanic exploration.

This ‘Sidecar’ for Psion PDAs Acts as an Internet Gateway

Is It Possible to Ride an E-Bike Made of Cardboard?

[ad_1] Over-The-Air (OTA) firmware update is one of the most important feature of any connected device. It enables the developers

[ad_1] Smart kitchen appliances are expensive, and more often than not, your usage data goes to whichever company operates the

Not A Pot, Not An Encoder: Exploring Synchros For Rotational Sensing