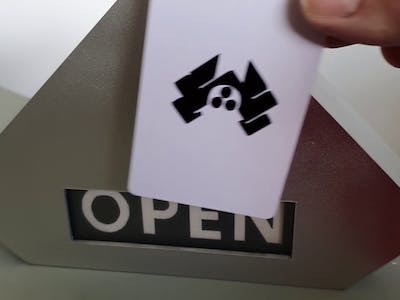 The plot of Die Hard centers around the efforts of thieves, posing as radical terrorists, as they attempt to break into a vault within the fictional Nakatomi Plaza skyscraper to steal untraceable bearer bonds. Our hero, John McClane, spends most of the movie trying to thwart their progress. The vault has many layers of security and the first is simply entry into the vault room, which requires an access card — something that still seemed high-tech in 1988. To practice his prop making skills, Robert Wallhead replicated that access card scanner prop.

The characters (Hans Gruber and hacker/tech specialist Theo) never specify in the film what kind of communication technology the scanner uses. But it functions like a modern RFID key card access system and that technology was in its infancy at the time, so it seems the most plausible and is what Wallhead chose to utilize for his prop replica. While some of the underlying concepts for RFID technology date back to the second World War, its practical use for applications like this was only starting to be explored in the 1970s. The term “RFID” itself wasn’t patented until 1983. The Die Hard prop team likely wasn’t concerned with the particulars, but RFID was the obvious choice for the replica.

Wallhead’s replica prop doesn’t actually need to unlock or open anything; all it needs to do is flash red like in the movie. That let Wallhead keep the electronic components simple. Those components include a Raspberry Pi Pico development board, an RFID reader module, and a small trip of Adafruit NeoPixel individually addressable RGB LEDs. When someone scans the proper RFID card (or any card, if Wallhead chooses), the NeoPixels light up. Wallhead carefully coded the LED illumination color and timing to mimic what we see in the movie.

The enclosure is a handcrafted box made of 1mm-thick ABS plastic modeling sheet, which is easy to cut and glue together. The “OPEN” lettering was hand drawn onto a piece of transparent acrylic sheet. Some glue, screws, and tape hold everything together.

As far as prop replicas go, this is an unusual choice. The access card reader in Die Hard isn’t a particularly iconic prop and many people won’t even recognize it. But we appreciate the attention to detail and Wallhead’s practical decision to start his prop making journey with something simple.

Getting Yourself Out of a Tangle

[ad_1] Over-The-Air (OTA) firmware update is one of the most important feature of any connected device. It enables the developers

[ad_1] Smart kitchen appliances are expensive, and more often than not, your usage data goes to whichever company operates the

Not A Pot, Not An Encoder: Exploring Synchros For Rotational Sensing