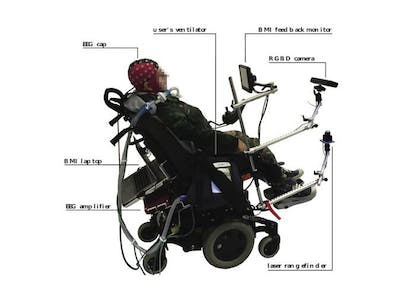 A team of researchers has demonstrated the practicality of mind-controlled wheelchairs as a means of providing tetraplegic users with greater freedom, providing they’re given proper training in the process — allowing their brains to adapt to the machine interface even as the machine learns from them too.

“We show that mutual learning of both the user and the brain-machine interface algorithm are both important for users to successfully operate such wheelchairs,” explains José del R. Millán, corresponding author of the study, which involved researchers from the Universities of Padova, Essex, Texas at Austin, the Wyss Center for Bio and Neuroengineering, and the Ruhr-Universität Bochum. “Our research highlights a potential pathway for improved clinical translation of non-invasive brain-machine interface technology.”

For mind-controlled wheelchairs, training users may be even more important than training the machines. (📷: Tonin et al)

The team’s work focused on three tetraplegic people, trained three times per week for between two and five months to use an electroencephalography (EEG) sensor cap connected to a deep learning system, which can convert thoughts into instructions for a motorized wheelchair. As each user thought about moving a body part — moving both hands to turn left, for example, or both feet to turn right — the algorithm could decode their thoughts and convert them into control signals.

Initially, before training, the success rate was low, with an accuracy of between 43 and 55 percent. As training went on, however, accuracy improved — with the first participant reaching a 95 percent accuracy rate by the end of training, and another participant hitting 98 percent prior to an algorithm reset halfway through the process.

The study participants were trained with focus on a key task: Navigating a cluttered hospital room. (📷: Tonin et al)

The most interesting finding of the study: The suggestion that it wasn’t just a question of the machine learning system improving, but of participants brains’ adapting too. “We see from the EEG results that the subject has consolidated a skill of modulating different parts of their brains to generate a pattern for ‘go left’ and a different pattern for ‘go right,'” says Millán. “We believe there is a cortical reorganization that happened as a result of the participants’ learning process.”

To back that theory up, the last participant in the study saw now significant changes to their brain activity pattern — and accuracy improved only slightly at the start of the training process before plateauing for the remainder. As a result, while the first two participants were able to complete a practical test involving navigating a cluttered hospital room the third participant could not.

“It seems that for someone to acquire good brain-machine interface control that allows them to perform relatively complex daily activity like driving the wheelchair in a natural environment, it requires some neuroplastic reorganization in our cortex,” Millán concludes.

The team’s study has been published under open-access terms in the journal iScience.