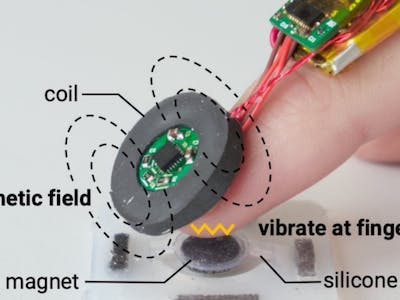 There is something satisfying about the sound and feeling of a proper “click” of a button. It gives reassurance that the input has been received and will be acted upon. Just imagine if the keys on your keyboard did not press down and give haptic feedback. More than likely, you would find it an awkward and unpleasant experience.

This is a problem that is beginning to rear its ugly head more and more as user input devices become ever more ubiquitous and appear on passive, everyday objects like walls and tables (we have recently covered some such devices, see here and here). Adding haptic actuation to these off-the-wall (or maybe I should say, on-the-wall) inputs is problematic in that it requires supporting electronics and batteries, in which case the passive inputs cease to be passive inputs.

Passive patches applied to a wall (📷: A. Mazursky et al.)

An interesting concept from the University of Chicago may just offer a solution to this problem. Called MagnetIO (not to be confused with the Marvel Comics villain, who could not be reached for comment), the solution makes use of a fingernail mounted, miniaturized voice-coil, magnetometer, battery, and microcontroller. Any number of small, stretchable, silicone patches are placed on surfaces in need of haptic feedback. These patches require no electronics or source of power. When a finger equipped with a MagnetIO device comes into contact with a patch, it vibrates in much the same way that a linear actuator in a smartphone causes it to vibrate.

The silicone patches are doped with neodymium magnet powder, and the silicone itself naturally acts as a spring. The voice-coil on the finger-mounted device generates a strong magnetic field when contact is made with the patch. By rapidly turning this field on and off, in conjunction with the spring action, the patch is made to vibrate in a controlled manner. Given the differing distribution of magnetic material in each patch, a unique ID can be ascertained by examining the magnetic field with a magnetometer. This allows for different vibration patterns for each patch. The team is currently using a simple method of encoding IDs into patches which allows for up to eight unique patches, which can be identified with 99.06% accuracy. This could be extended to use a more sophisticated method, like machine learning, perhaps at the expense of greater power consumption.

Adding haptic feedback anywhere by just sticking a flexible patch on the surface offers lots of opportunity to improve unconventional input devices. At present, however, the tiny battery onboard the device is only good for about one hundred button presses. Adding a larger battery would solve this problem, but would also make MagnetIO larger, and less practical for daily use. A possible further issue is that, while the magnet is perfectly safe for use with the patches, this device is likely to be worn by people that interact with lots of other digital devices — and such devices typically do not take kindly to being exposed to a powerful magnet.