We’ve recently published an update about KrakenSDR field reports and software updates to our KrakenSDR CrowdSupply page. We are cross posting here as well. This update provides some demonstrations of the KrakenSDR that users have uploaded, and provides some updates on some new software that we have been working on.

Also as we’ll note shortly in a separate post, we wanted to highlight that our website for direct sales of KrakenSDR and antenna sets is now live at our KrakenSDR shop. Please note that we only have a limited number of KrakenSDRs that we can sell directly, and once they run out, all other sales must go through CrowdSupply.

In this video Frugal Radio unboxes and tests his KrakenSDR and Krakentenna’s on a vehicle. He is able to come to the location of two unknown transmitters within minutes.

In this video F4IPO demonstrates his ability to use a KrakenSDR and Krakentennas to locate a TETRA transmitter within 5 minutes.

In this video Aaron, creator of DragonOS demonstrates two networked KrakenSDR devices being used with DF-Aggregator and an alpha version of our Kraken Pro Cloud Mapping software (introduced further below). One KrakenSDR is fixed, and another is on a moving boat. He is able to track a beacon on land.

In these videos F1MIJ provides multiple screen recordings of the KrakenSDR Android App in action during a drive.

In this video Manuel Lausmann unboxes the KrakenSDR.

For a taste of how the system works in practice, here’s a plot of DFing the WTOP (103.5) transmitter. We started at the right side (at the Hughes Tower), and ended up (correctly) at the American University tower. The little whiskers along the plot are individual bearings. pic.twitter.com/calkqJd8qU

KrakenSDR user Adrian has been experimenting with a KrakenSDR Passive Radar setup in his backyard. He has posted an excellent and comprehensive document on our forums detailing his setup and experiences. 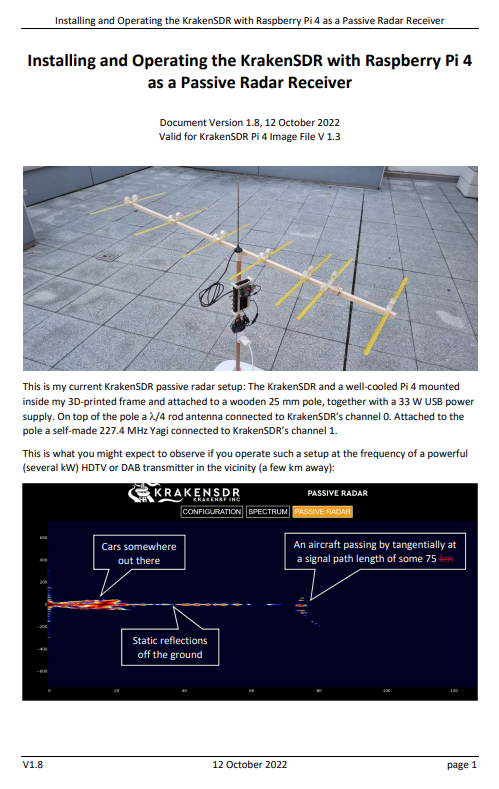 At the same time he has also created a nice 3D printed frame assembly which can hold the KrakenSDR and Raspberry Pi 4 as one unit. The 3D model has been uploaded to Thingiverse for free. 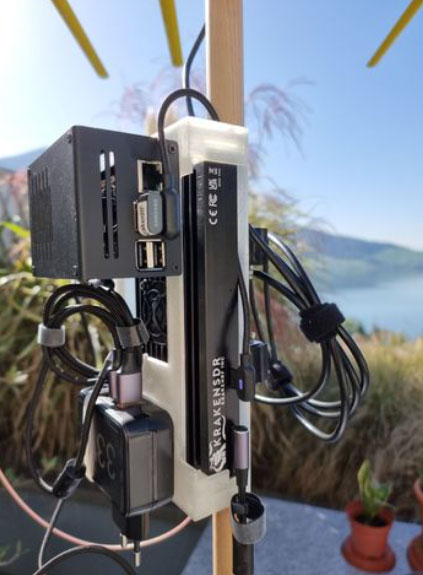 Aaron (whom we mentioned earlier) has also been heavily posting on Twitter showing how he’s been successful at getting his KrakenSDR running on a SteamDeck, a new type of handheld gaming device from Valve. 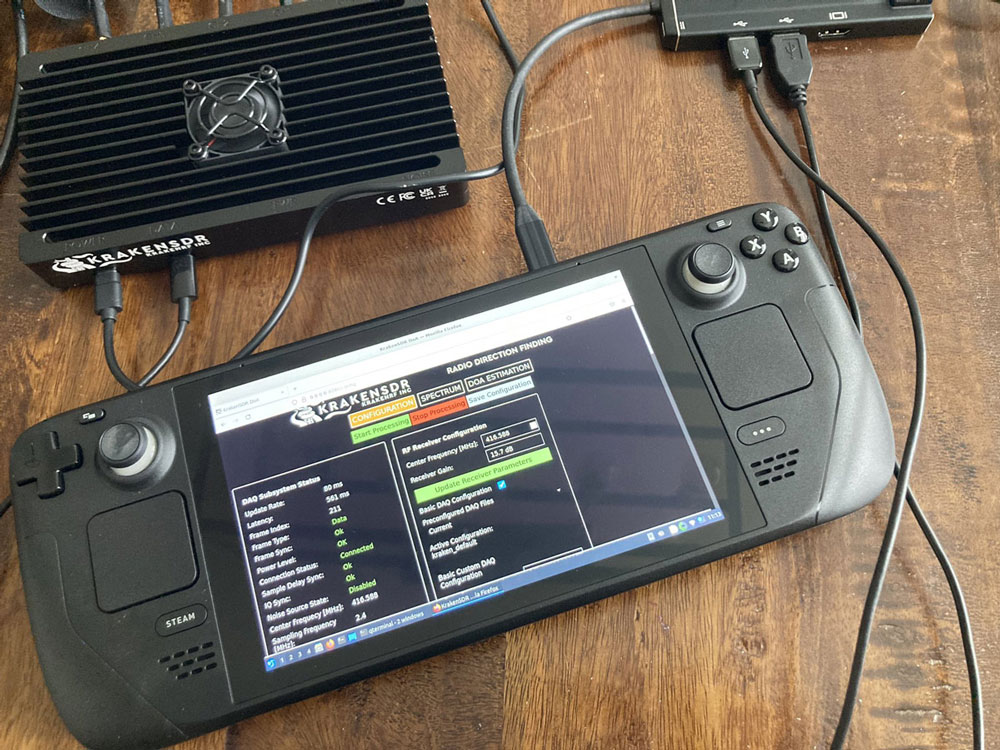 He also briefly demonstrates the KrakenSDR being used as five independent receivers in SDRAngel. 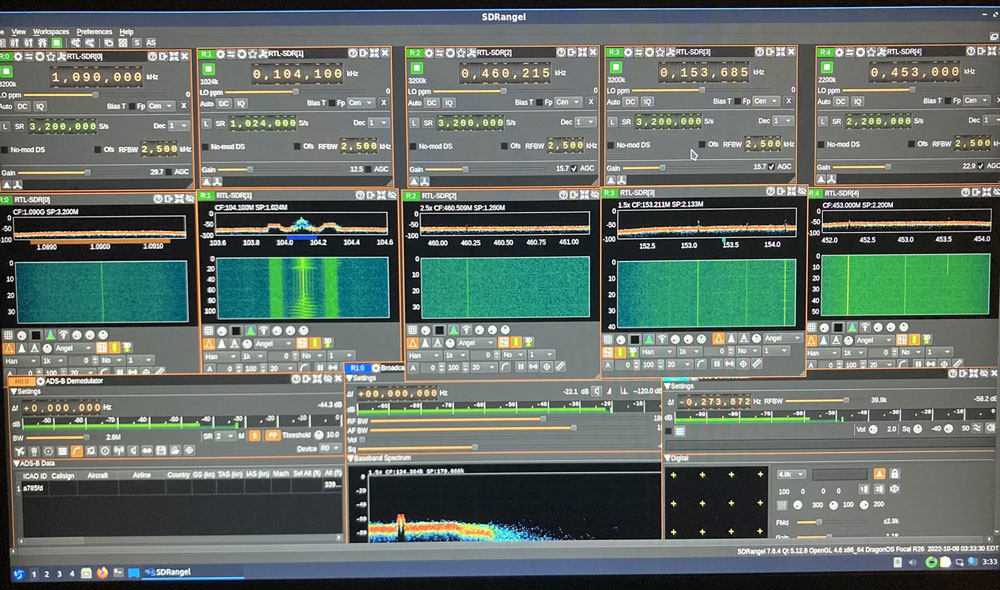 We also wanted to note that we now have our website live at www.krakenrf.com. This is mostly a marketing and general overview website. All the technical documentation and guides will remain on the GitHub Wiki.

We have also now released our KrakenSDR forum at https://forum.krakenrf.com. If you have general questions, or support inquires please post there rather than through email so everyone can learn. If there are specific software bugs, please continue to post those as GitHub issues.

We are now releasing an early alpha version of our online ‘Kraken Cloud Pro’ service. We want to note that this software is still in ALPHA status. That means that all the intended features are not yet implemented, and that it may have multiple bugs. We also do not guarantee any uptime for this service at this time.

Kraken Pro Cloud is our online cloud mapping solution for KrakenSDR devices. It allows you to upload KrakenSDR direction finding data onto our central server, so that you can combine bearing data from multiple geographically distributed KrakenSDR devices. With the right geography of the receivers and transmitter, this allows you to instantly determine the location of a transmitter without needing to take multiple readings with a vehicle.

Documentation on the use of Kraken Pro Cloud is available on our Wiki at this page. 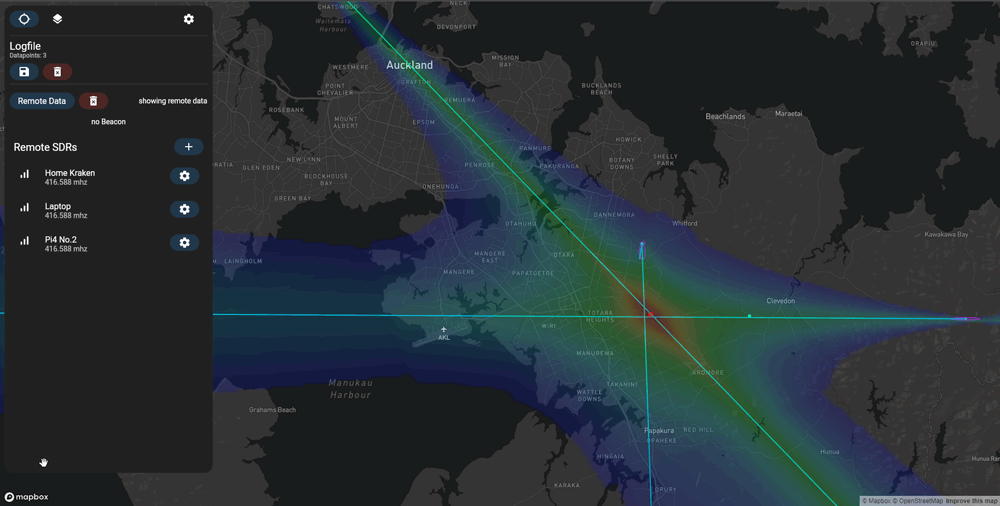 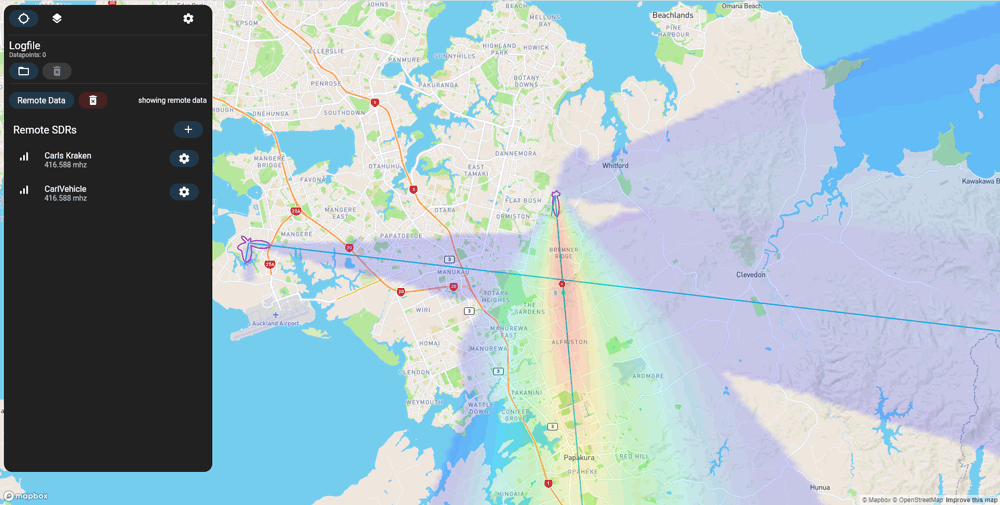 You can also do offline analysis of log files collected from the Android App or recorded via the Web GUI. 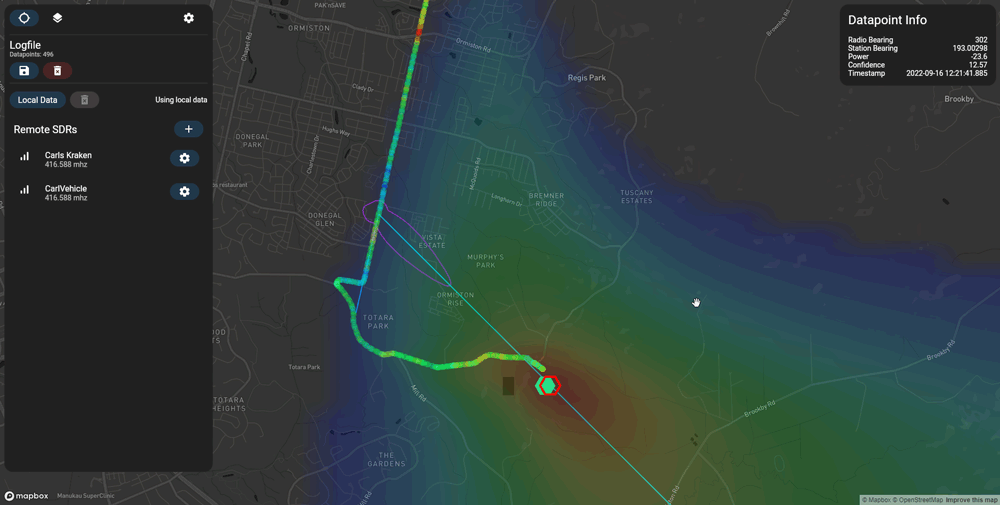 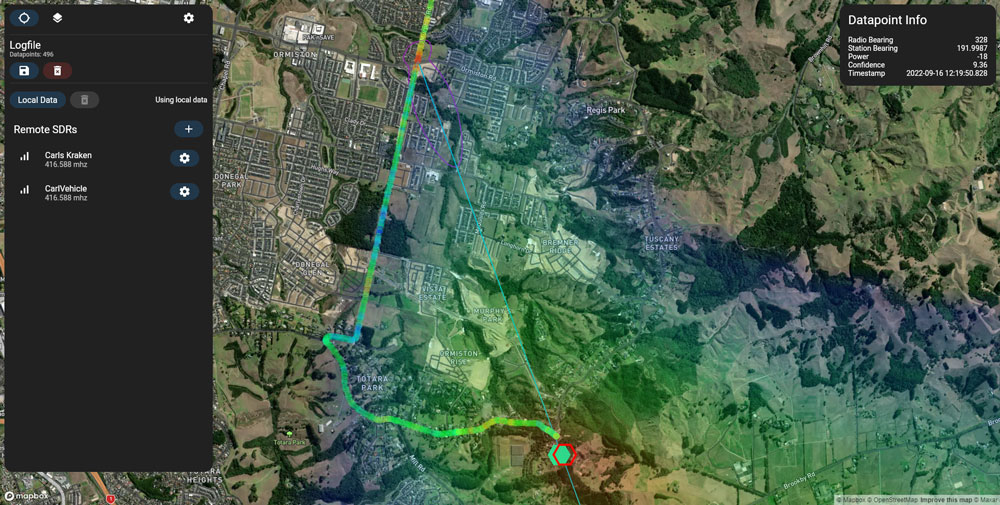 As part of the testing of the service we recorded a timelapse of a KrakenSDR station tracking a weather balloon.

In the near future we will be uploading more demonstrations like this with multiple stations set up.

Our team continues to make steady progress on more advanced passive radar code as well. This is the code that will be able to track targets and plot them on a map, by using an array of passive radar surveillance antennas with the KrakenSDR. The gif below is a brief demonstration of the target tracker (with very weak data). Future tests will involve stronger target detections, and multiple targets.

At the same time we have also added a bit of additional information to the Passive Radar Wiki, and are beginning work on a map plotting solution involving Kraken Pro Cloud. Initially the system will allow uses to plot a bistatic range ellipse on the map for detected targets, and eventually when we have target pinpointing down, to plot the locations of the targets directly on the map. 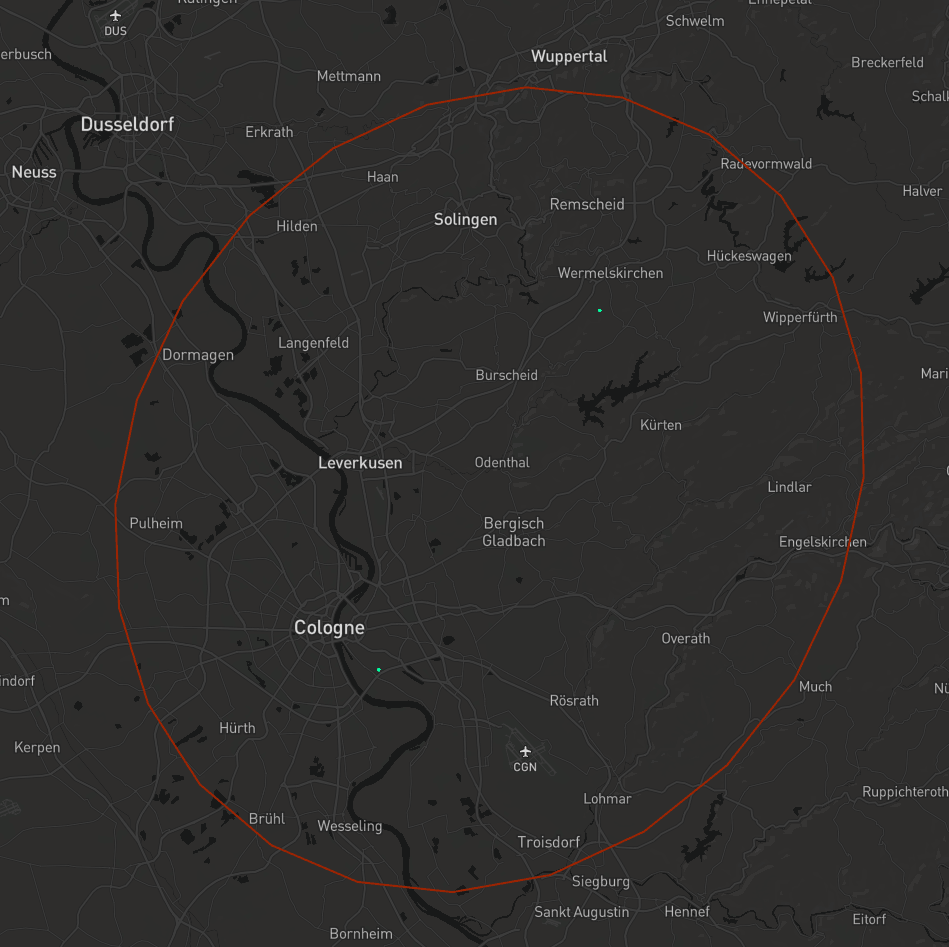 We also wanted to share this multi-data passive radar range-doppler plot taken which shows an integration of quite a bit of activity, including flight paths into and out of an international airport, as well as vehicles, and small aircraft airports. 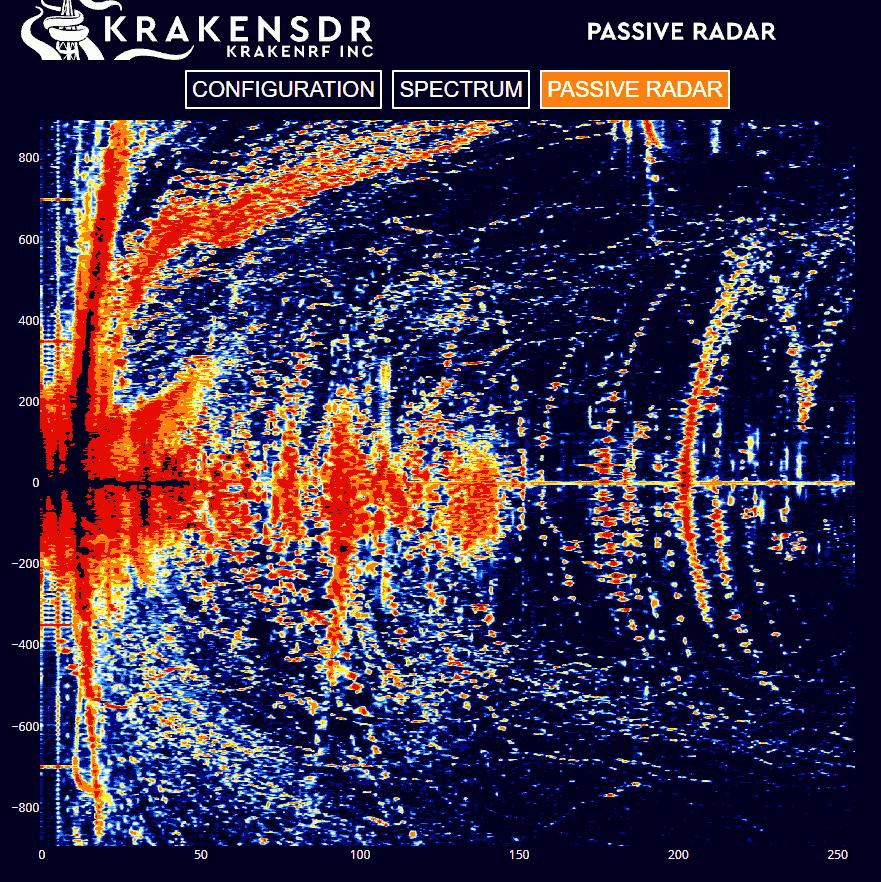