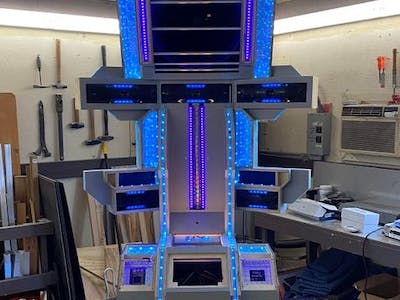 The nature of reporting is that websites like ours usually only feature the most impressive projects. We love seeing makers make, regardless of the complexity of the project, but we can only cover those projects that stand out. As such, a lot of makers end up feeling like their work isn’t worthwhile, because it might not compare to work they see on our website and others. But Redditor Shamanwolf2000, who is a self-professed “noob,” has proven that anyone can build something noteworthy. Using a Raspberry Pi, they made this amazing arcade cabinet that puts professional cabinets to shame.

Even before video arcades came into existence, old-school arcades were full of eye-catching games. Pinball machines were, for example, covered in flashing lights. The better a machine was at getting the attention of passersby, the more money it would make. Shamanwolf2000’s custom arcade cabinet takes that idea to the extreme, even though it was only built for their own personal use. It has more blinking lights than Times Square on New Year’s Eve and several screens that exist solely to add to the effect. If Shamanwolf2000 is playing The Legend of Zelda, those screens can show Triforce or Master Sword graphics. If they’re playing Super Metroid, those can display nifty sci-fi graphics.

This arcade cabinet is still a work in progress and Shamanwolf2000 hasn’t provided many details yet. We do know that the games run on RetroPie, which Shamanwolf2000 installed on a Raspberry Pi 4 Model B. It seems likely that the other screens are also controlled by Raspberry Pi single-board computers. Though Shamanwolf2000 say that they are a noob, it is clear that they have a great deal of woodworking experience, which helped them construct the cabinet from Formica.

The cabinet doesn’t look anything like a standard arcade cabinet. It looks more like a prop from a Tron movie. Several strips of individually-addressable RGB LEDs line the cabinet. Their colors and patterns can be set to suit the currently running game. The actual gameplay screen is fairly small and located towards the bottom. In place of a joystick and arcade buttons, Shamanwolf2000 has connected a USB gamepad. Finally, a handful of speakers are array around the central screen to provide an immersive audio experience.

Even if you don’t care about video games or arcade cabinets, this project should show you that even people with very little technical experience can complete some amazing builds.

CoopCommand Is a DIY Device That Controls Chicken Coops