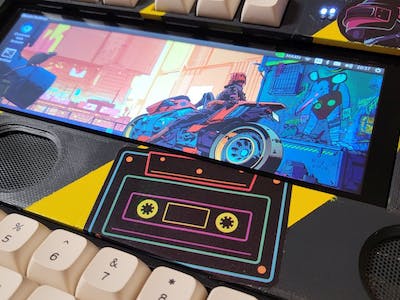 As a reader of Hackster News, it is highly likely that you have more computers than you can keep track of. ut of course they all have a purpose — a desktop for the most computationally-intensive tasks, a laptop for normal, day-to-day hacking, a Raspberry Pi for embedded work, a smartphone for email and casual web browsing, and a slew of others in a drawer that were definitely needed for something or other at one time, but you cannot quite recall the purposes anymore. But even with this hoard of computers at our disposal, there is always a project that comes up where we could use something just a little bit different than what we have; something perfectly tailored to the task that would make things easier and faster.

Hardware hacker and roboticist whoobee recently found himself in this situation while working on a ROS-based robotic coffee table. Finding the project very difficult to debug, he realized things would flow a lot smoother if he only had a small, portable Linux machine with a nice keyboard and trackpad, and also a reasonably-sized, yet compact display to run a terminal in. This would provide just the right platform to sit next to this (or any other) robot to test things out and make quick changes. And of course it needs to be done with style, so whoobee gave the little computer the full cyberdeck treatment.

Making the cyberdeck look great is nice and all, but you would not want your new favorite computer to be all style with no substance, so whoobee started with the powerful 4GB NVIDIA Jetson Nano computer as a base. With 472 GFLOPs of compute power, the Jetson can handle ROS debugging with ease, and is also up to the task if you want to add some intelligence to those robots with machine learning. To make the keyboard very usable, yet also compact, a 60% keyboard was selected and paired with a trackball. The ultra-wide 7.9” WaveShare 400×1280 display was selected to keep with the compact theme, but yet it is also sufficiently wide to have three terminal windows open simultaneously.

A 10,000 mAh power bank was included so that the cyberdeck’s portability would not be restricted by any cords, however, whoobee notes that if he were to start again, he would select something with a larger capacity. A handful of additional, special purpose buttons were added to turn the computer on and off, serve as mouse buttons, toggle the display on and off, and a few other functions.

Mounting the NVIDIA Jetson Nano in the case (📷: whoobee)

A 3D-printed case was then designed and printed to add the final finishing touches to the cyberdeck. Since whoobee only has a small printer, the case was printed in multiple pieces which were then glued together with epoxy. If you happen to have a larger printer, the build might be a bit simple and cleaner. With a bit of extra space remaining, a pair of Nintendo Joy-Cons were given spots to mount to the case. These can come in handy when a robotics project is not exactly going according to plan and you need to take manual control.

Building a custom computer such as this takes quite a bit of time and effort, but the complete customization can pay dividends in future time savings. And perhaps equally important to the cyberdeck enthusiast — it just looks really cool.

This Could Get Sticky – Hackster.io