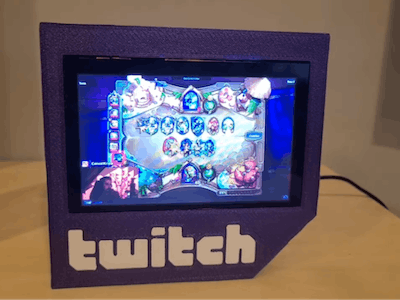 I’m 33 years old and so I don’t get it, but I hear that kids these days love to watch streamers play video games instead of playing those video games themselves. While there are other platforms, Twitch is the undeniable king of video game streaming websites. Twitch says that they have more than 2 million active broadcasters, but I assume that only a few of them get viewers. Those viewers don’t want to miss a moment of their favorite streamers’ content, which is why Bob built this dedicated twitch.tv TV that automatically starts playing a streamer’s video when it goes live.

When I say “automatically” I mean it. This device doesn’t have a single control button or knob. As soon as the pre-configured Twitch channel goes live, the device will begin playing the stream at full volume. The only way to stop it is to either unplug the power cable or remotely log into the device’s operating system with a separate computer. Clearly, the twitch.tv TV is only for the hardest core of fans. Fortunately for those fans, the device’s hardware is quite simple, consisting of a 3D-printed shell, a Raspberry Pi, and an ELECROW 5” touchscreen IPS display with built-in speakers.

The 3D-printed enclosure resembles the Twitch logo and looks really nice. As Bob explains, he printed the white text on the purple shell using a technique for single-extruder 3D printers. First you print the white text in a single layer. Then you swap to purple filament and print the rest of the enclosure on top of that. Both the Raspberry Pi (any model will do) and the touchscreen fit into that enclosure.

All of the device’s “magic” comes from Bob’s script. If you’re going to replicate this build, be sure to change the Twitch channel within the appropriate file according to Bob’s instructions. It seems that you can also change the stream resolution if you want to avoid tying up too much of your bandwidth with this silliness.

Transport Your Cargo Hands-Free with This Autonomous Human-Tracking Robot

Get Your IoT Act Together

Take a Breather for Better Health

If you tried to make some fancy UI without any graphic library, you know, how hard it is. Fortunately, there

So How Do You Make A Self-Destructing Flash Drive?

Epoxy Blob Excised Out Of Broken Multimeter, Replaced With A QFP