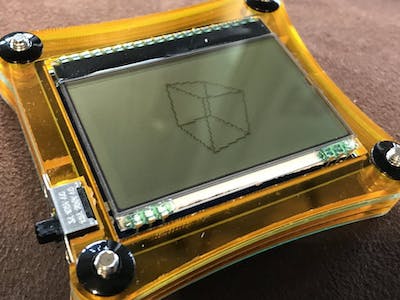 As its creator Gabor puts it, “Dot-Dot-Tilt! can simulate flowing sand or a rolling cube, all controlled interactively by tilting the device.” It’s a refreshingly simple amusement. Just turn it on and set it on a level surface for calibration. You can then choose to control either a rotating 3D cube or a sand simulation on its LCD screen.

The Dot-Dot-Tilt! tasks an MPU-6050 module for level sensing, along with a Seeeduino XIAO SAM D21 dev board for processing. A small 128×64 pixel resolution EA DOGM128W-6 LCD display is used to show either the cube or sand simulation. Components implemented feature fairly low power requirements, allowing it to be supplied by only a single coin-cell battery.

A laser-cut acrylic case completes the build, which is a rather pleasing design. Build files for the device’s PCB and case are available on GitHub, as well as the code if you’d like to peruse this design, or build your own. The device, running both the sand and box simulations, is demonstrated nicely in the video below.

Of course, if you do decide to pick up this build and run with it, Gabor has a few improvement ideas, including enhanced gesture detection, hiding the (should-be) invisible edges of the cube, and potentially even new games. He’d also move the IMU to the middle of the PCB for improved sensing if starting from scratch. It’s something to keep in mind if you make your own motion-based device, inspired by this one or not!