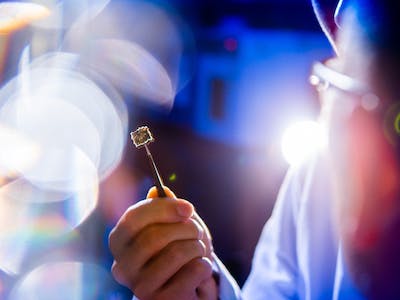 Engineers at the University at Buffalo have developed a magnetic material that can monitor that can monitor the amount of life left in lithium-based batteries before they need to be recharged. When lithium-ion batteries charge and discharge, lithium ions flow from one side of the battery to the other. Using that widely known information helped the team build a lithium-ion battery that uses a new material at one end – a compound whose magnetism changes as lithium ions enter or leave it. That property makes it possible to accurately measure the amount of energy remaining in the battery.

“The main goal of this project was working on the magneto-ionics, which uses ions to control the magnetism of materials. As the lithium ions travel in or out of the material we are using, the material will change its magnetization,” said UB professor Shenqiang Ren. “We can monitor the magnetism, and this enables us to indirectly monitor the lithium ions – the state of charge. We believe this is a new way to provide an accurate, fast, responsive sensing of the state of charge.”

“We believe this is a new way to provide an accurate, fast, responsive sensing of state of charge.” (📷: Douglas Levere / University at Buffalo)

The magneto-ionic material was created with vanadium, chromium and cyanide with an aqua ligand. The material was used to create a state-of-charge (SOC) sensor to accurately measure the insertion/extraction of ions on a molecular magnetic electrode. A microwave-excited spin wave unveils the lithiation level on a molecular-magnetic cathode, enabling precise magneto-ionic-based SOC monitoring under a low frequency and magnetic field of 0.35 GHz and 100 Oe, respectively. According to the researchers, the magneto-ionic-based sensor shows a more than 2,000% increase in accuracy and a more than 5,000% reduction in response time.