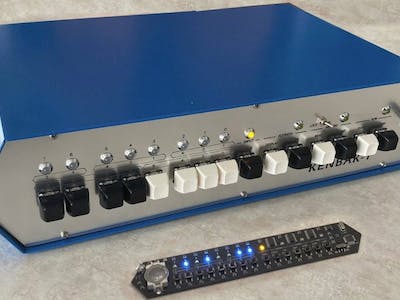 Adwater & Stir is celebrating 50 years since the launch of the Kenbak-1 personal computer with an intriguing recreation — and one, unlike the original, which you can pop into your shirt pocket for vintage computing anywhere and anytime.

Created by the Kenbak Corporation’s John V. Blankenbaker in 1970 and launched in 1971 at $750 (equivalent to $4,905 today), the Kenbak-1 is considered to be the first device fitting the requirements to be termed a “personal computer.” It’s also a rarity. Despite technically being an active product through to 1973, only 50 machines were ever made — and just 14 are known to exist today — and sales were not enough to keep the company afloat.

These ruler-like boards recreate the functionality of the Kenbak-1, the first personal computer. (📷: Adwater & Stir)

“You can experience this tiny little work-alike computer based on the ATmega328P processor,” Adwater & Stir writes of its homage to the Kenbak-1, the nanoKenbak-1. “It perfectly emulates the operation of the original Kenbak-1, with 15 push buttons for input and 12 LEDs for output. Store programs of up to 256 bytes! Watch them execute at (almost) 1kHz!”

“Just to make this device a bit more fun, we’ve added some extensions to the original functionality: A real-time clock with three display modes (BCD clock, Binary clock, and Counting clock). Eight memory locations so you can save your favorite programs and easily show them off to your friends. Built-in programs for hours of enjoyment.”

The nanoKenbak-1 isn’t Adwater & Stir’s first foray into recreating Blankenbaker’s design, though: An earlier design placed similar hardware in a reproduction chassis as a do-it-yourself kit, priced at $149.95; with the µKenbak-1 now discontinued, the nanoKenbak-1 is its replacement — and at $30, albeit without a case, considerably cheaper.

The nanoKenbak-1 is now available on Tindie.

How One Maker Built a Smart 12000W Hovercraft

Try to Look on the Bright Side