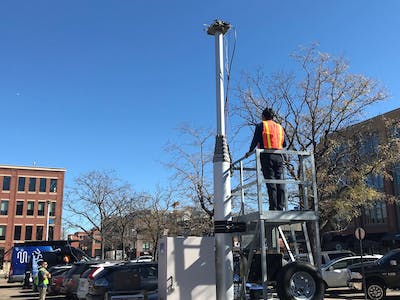 City infrastructures depend more and more on Wi-Fi to function, and public Wi-Fi is deployed more broadly than ever. To better distribute network access, we may begin to rely on an already abundant urban asset: streetlights.

The Telecom Infra Project, a global network of companies and organizations who work to accelerate the development and deployment of technologies providing high-quality connectivity, is making a strong push toward utilizing the 60 GHz unlicensed band for public Wi-Fi. To be exact, the project has begun work to install access points on light poles. A lot goes into making sure such networks would function well. Many 60 GHz urban channel measures have been attempted but have resulted in limited data as they produce path loss models of RMS delay spreads. They have not reached the spatially consistent channel model required at millimeter-wave frequencies, which are sparse and tend to scatter off rough surfaces.

Researchers at the National Institute of Standards and Technology (NIST) have developed a novel model to analyze the optimal height at which Wi-Fi equipment should be attached. The team found that the optimal height does depend on both transmission frequency and antenna design, and in general higher locations — around six or nine meters up — are better for systems like 5G, which use higher millimeter-wave frequencies and narrow-beam antennas.

Data shows that signal spreads are wider at higher heights, which means that for conventional systems in which smaller spreads are preferable to avoid interference, mounting equipment at lower heights is preferable. However, next-gen wireless systems operate at millimeter-wave frequencies and employ highly directional antennas with very narrow beams. In this configuration, the transmitter and receiver steer the narrow beams to find the best possible link, making a high angular spread preferable. The higher height and wider spread will provide diversity in space, allowing transceivers more access to find the best possible link.

NIST’s channel model for tracking transmissions recognizes the sparse, scatter-prone features of these signals and uses a novel algorithm to analyze their measured paths. This extends beyond the usual parameters of signal delays and angles to include receiver location, resulting in a prediction accuracy comparable to that of more complicated systems.

The model was tested against actual channel measurements at a site in downtown Boulder, Colorado, recording measurements at four, six, and nine-meter antenna heights to determine the most efficient positioning. Using custom NIST equipment called a channel sounder, along with a transmitter and mobile receiver, researchers are able to precisely measure many radio channel characteristics and time dynamics. The model turned out to be a good match for the real-world measurements; using the model. A service provider can successfully account for the various advantages and disadvantages of 60 GHz access points and signals in urban environments. The model might also potentially be generalized to a broader scope of environments and use cases.

We had announced the availability of AWS IoT LTS libraries for ESP32 in beta in esp-aws-iot repository in August, 2021.

While it’s true that some plants thrive on neglect, many of them do just fine with a few ounces of

Defeat Your Car’s Autostop Feature With A Little SwitchBot

One Coder Is Porting Portal To The Nintendo 64