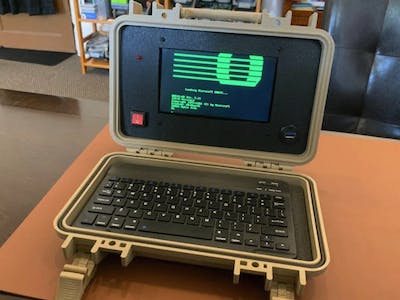 Maker Don Kosak has shared a cyberdeck build powered by a Raspberry Pi 4 Model B 2GB and inspired by a classic cautionary tale of the 1980s: the Osborne 1 portable microcomputer.

Released in April 1981, the Osborne 1 luggable is generally recognised as being the first commercially successful portable microcomputer – despite a back-breaking 24.5lb weight and lack of internal battery meaning it can’t actually be used if you’re away from a power socket. Its early success, though, didn’t last: The launch of the IBM PC in August 1981 and the Compaq Portable in 1983 — and sales took a hit when company founder Adam Osborne announced but failed to launch a higher-end successor, the Osborne Executive, leaving many customers saving their money for the next device instead.

Its ill fate in the industry doesn’t mean the Osborne 1 isn’t without its fans — and Kosak liked the machine enough to have built a modernised emulated version, considerably lighter and powered by a Raspberry Pi single-board computer.

“I know it’s not exactly a classic ‘Cyber Deck,'” Kosak writes of his project, “but I thought I’d share my retro 1980’s Osborne 1 remake project. It’s a faithful software replica of the Osborne 1 luggable CP/M machine. I used a Raspberry Pi microcontroller with a stripped down version of MAME [formerly the Multiple Arcade machine Emulator] to do the heavy lifting of emulating the classic Z-80 beast.”

The entire unit is housed in a Pelican 1170 case, including the removable keyboard. (📷: Don Kosak)

The build uses a Pelican case which houses a wireless keyboard, a 7in touch-screen display, and a Raspberry Pi 4 Model B 2GB — “overkill,” Kosak admits, “but it’s what I had on hand.” Software, meanwhile, is provided from disk images captured from floppies Kosak had during his ownership of a real Osborn 1 machine.

“I tried to match the aesthetics of the original with the tan case and textured ABS plastic. I used 1/16th inch ABS sheets to build up the interior and mount the display, USB port and switch. I had some 1/8th inch sheets but the 1/16th was pretty rigid and was much easier to work with.”

More details on the build can be found on Kosak’s Reddit thread.

Larry Bank Is Laying Out the Libraries We All Love to Lament!