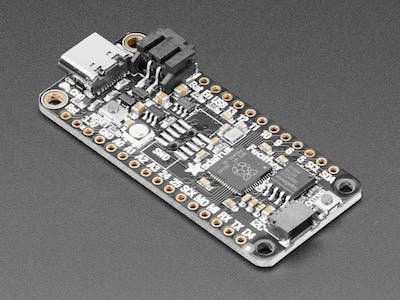 Adafruit is working hard to get its new development boards, based on the same RP2040 microcontroller as the Raspberry Pi Pico, out of the door — and it’s turned to a Teensy 3.6 to drive a programming and test rig.

Adafruit is among the companies who have taken Raspberry Pi up on the offer of making its in-house RP2040 microcontroller generally available, after it launched at the heart of the Raspberry Pi Pico development board, and has already launched two boards of its own: The ItsyBitsy RP2040 and the Feather RP2040. To ship these boards, though, they have to be programmed and tested first — and that’s where an earlier development board, the Teensy 3.6, comes into play.

“We want to make lots of Feather RP2040s, so we can ship them to all the folks who are wanting them — so its important for us to make the test procedure super fast and simple,” the company explains. “Thanks to Thach’s intrepid work with USB, we can now use the Teensy 3.6’s USB host support to ‘drag and drop’ a UF2 file over the USB interface to program it.

“At 100 KB/s, we can load our test program, verify all the hardware, and load a demo program all in under 2.5 seconds. When you’re making thousands of these boards, that time adds up so this will let us get you hardware faster!”

The source code for the Feather testing jig has been published to Adafruit’s GitHub repository, while the Feather RP2040 is now available to buy for $11.95.

FabGL, the Fantastic ESP32 Library for Graphics, Emulation and More, Gets a Reference Board Design