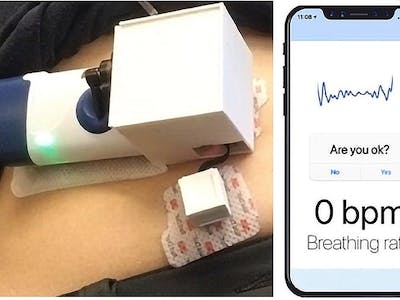 A team of researchers from the University of Washington has built a wearable designed to literally save a life — by detecting and reversing an overdose of opioids.

“The opioid epidemic has become worse during the pandemic and has continued to be a major public health crisis,” explains Justin Chan, lead author and PhD student at the UW’s Allen School of Computer Science & Engineering, of the inspiration behind his team’s work. “We have created algorithms that run on a wearable injector to detect when the wearer stops breathing and automatically inject naloxone.”

Building on similar principles to an insulin pump, the wearable injector sits on the patient’s stomach and connects wirelessly to a companion application running on a smartphone. A pair of Bosch Sensortec BMA400 three-axis accelerometers measure the subject’s breathing rate, and if a pattern of breathing associated with an opioid overdose is detected by the Nordic Semiconductor nRF52840 microprocessor in the system an alarm is triggered — and naloxone, an antidote that can reverse the overdose, is automatically injected.

“This wearable auto-injector may have the potential to reduce fatalities due to opioid overdoses,” claims co-author Shyam Gollakota, associate professor of computer science and engineering, of the work. “We are hopeful it can have a tangible impact on a big source of suffering in this country.”

The system is designed to be worn on the stomach, and will automatically inject naloxone to reverse an overdose. (📷: Chan et al)

In two studies, first on 25 participants with opioid-use disorder then on 20 healthy volunteers, showed the system capable of detecting both opioid-induced apnea —and of automatically injecting naloxone, confirmed by blood draw after being triggered.

The team is working with West Pharmaceutical Services, which developed the injector hardware, to make the device more widely available — but it requires additional testing for comfort, confirmation of its suitability for use in unsupervised settings, and approval from the US Food and Drug Administration (FDA).

The work has been published under open-access terms in the journal Scientific Reports.

AudioMoth Dev Is an Acoustic Development Board