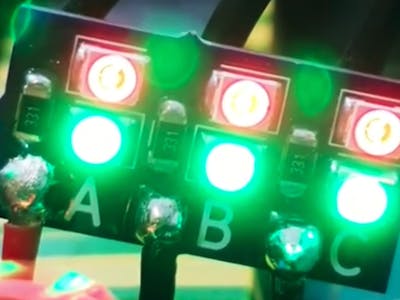 When working with brushless motors, you normally use an electronic speed control, or ESC, to power them. These are staples in the drone realm and other instances where controlled high-speed rotation is needed, and they normally work quite well. When your setup isn’t working, however, what do you do?

While there are a number of diagnostic techniques, from breaking out a multimeter or oscilloscope, to simply changing parts until things work, LouD has another clever solution: just hook up a bunch of LEDs! As shown in the clip below, his little board takes an input from the ESC and hijacks a tiny bit of juice before it reaches the motor in order to light up its LEDs. This gives an indication of what’s going on, in the same way that a blinking LED on an Ethernet cable might not give you a lot of information, but at least tells you it’s doing something.

The device has two LEDs per phase, so it can visualize both the ESC’s high and low phases. Although it would be easy enough to hack something together yourself, you can order a tester PCB on OSH Park here for two bucks and some change!

Of course, if ESCs aren’t a problem for you, an LED-power-hijacking-indicator could be put to use in a variety of scenarios. As outlined here, after having some communications issues with my router, I created a “Parallel LEDinator” to see if it was indeed getting the proper signals. As it turns out, the problem was matter of software, but it’s always fun to have a few extra blinkenlights to help keep track of and/or diagnose problems with your machinery!

Panic’s Playdate Is Pushed to 2022 as Battery Issues, Component Shortages Crank Up the Pressure

This Game Boy Cartridge Has Its Own OLED Screen