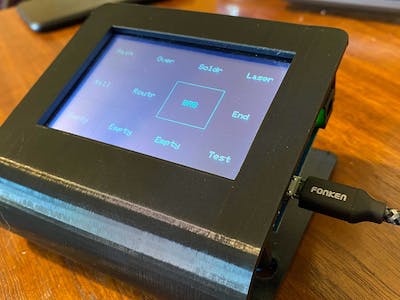 If you’re a streamer, then you know that a lot more goes into the job than simply playing a game while people watch. You also have to control your video stream and do so in real time seamlessly as your viewers are watching. OBS (Open Broadcaster Software) Studio is free and open source software that can help you control your stream, but using the software with a keyboard and mouse while you’re trying to stream can be a challenge. That’s why dedicated controllers, like the Elgato Stream Deck, are popular. But they’re also expensive, which is why you should check out Aaron Peterson’s obscene_deck instead.

As the name suggests, the obscene_deck is intended specifically for working with OBS Studio scenes. It has a touchscreen interface that is completely customizable. It lets you quickly and easily switch between scenes by simply tapping the screen. For instance, you may want to switch between your primary streaming scene with a webcam overlay to a “be right back” scene. You can do that with obscene_deck by tapping the “BRB” button on the touchscreen. This is customizable, so you can set it up to work with whichever scenes you have created in OBS Studio. The default interface has room for up to 12 different scene buttons to be shown at any given time. You can also set some of those up as buttons to mute your microphone or disable your webcam.

The Elgato Stream Deck costs a whopping $150, but Peterson’s obscene_deck can be built with just $30 worth of hardware. The two primary components are an Arduino Leonardo and a small touchscreen TFT LCD shield. The Arduino Leonardo was chosen because it can be configured to show up as a USB HID keyboard when plugged into a keyboard. That is important, because it is sending OBS Studio keyboard shortcuts to your computer in order to switch scenes or control the other functions. The code for that functionality is provided and is easy to customize to fit your specific OBS Studio setup. The Arduino and the touchscreen are housed within a simple, minimalist 3D-printed enclosure that will sit unobtrusively on your desk. If you’re looking for an affordable and configurable stream deck controller, this is a great option.

If you tried to make some fancy UI without any graphic library, you know, how hard it is. Fortunately, there

So How Do You Make A Self-Destructing Flash Drive?

Epoxy Blob Excised Out Of Broken Multimeter, Replaced With A QFP