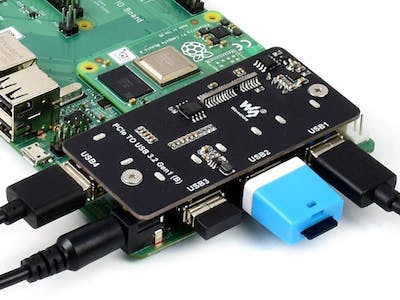 Anyone building around the Raspberry Pi Compute Module 4 and the official IO Board carrier has new option for peripheral connectivity: an ultra-low-profile four-port USB 3.2 Gen. 1 adapter board from Waveshare.

When the Raspberry Pi 4 launched, one of its most interesting new features was a swap to USB 3.0 for two of its four USB ports — connected to the system-on-chip over a PCI Express lane. The Raspberry Pi Compute Module 4, the system-on-module built around the same SoC, has no USB 3.0 connectivity at all — instead exposing that PCI Express lane at the edge for board builders to use as they wish.

Raspberry Pi’s official IO Board takes a Raspberry Pi Compute Module 4 and breaks out all its various features — but, just like the module itself, lacks any USB 3.0 connectivity. Enter Waveshare’s latest launch.

Brought to our attention by CNX Software, Waveshare’s IO Board add-on is an unusual PCI Express card: Rather than inserting into a slot vertically, it sits over the slot horizontally — fitting perfectly at the edge of the IO Board while barely adding anything to the height.

The board’s designed specifically for the IO Board, but can be used with any PCIe slot using an extension. (📷: Raspberry Pi)

Based on the same VIA Labs VL805 as used on the Raspberry Pi 4, guaranteeing software compatibility, the board adds four USB 3.2 Gen. 1 Type-B ports — three at the far edge and one next to the microSD slot and power jack. All four ports, however, share the single PCI Express lane to the SoC — which means a potential performance bottleneck if you’re using all four at the same time.

The board is now available from Waveshare’s web shop, priced at $17.99 before volume discounts.

This Insect-Sized Robot Has the Same Agility as a Cheetah