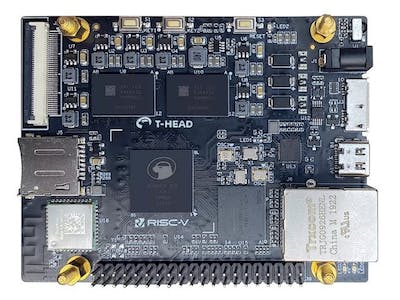 Sipeed’s partnership with T-Head started last year and resulted in the launch of the Nezha, a 64-bit Linux-capable single-board computer built around the Allwinner D1 incorporating T-Head’s XuanTie C906 RISC-V processor core. Designed for the Internet of Things (IoT), the Nezha’s performance is relatively low – primarily thanks to being a single-core in-order part.

The new T-Head C910 dual-core RISC-V chip is now available on a development board – in very limited quantities. (📷: Sipeed)

The RVB-ICE, by contrast, uses a XuanTie C910 core — still a Linux-capable RISC-V part, built around the RV64GC instruction set, but offering a significant performance boost thanks to a dual-core design with out-of-order completion.

The board’s system-on-chip includes the two C910 RISC-V cores running at up to 1.2GHz plus, previously-published documents suggest, a third C910V core which incorporates the v0.7.1 draft of the RISC-V Vector Extensions – though it’s not clear whether all three cores will be exposed to the underlying operating system. A Vivante GC8000UL GPU is included alongside a neural processing unit (NPU) coprocessor for edge AI tasks, while there’s a 4GB of LPDDR4 memory and 16GB of eMMC storage.

The board is claimed to offer Android 10 and Debian 11 “Bullseye” support, but at the time of writing operating system downloads were not yet available. A mandatory hardware bundle, aimed at developers, also includes a 7in 1024×600 capacitive touch-screen display with a housing that mounts the development board at the rear.

There are two blockers to widespread adoption of the board, however – and they’re directly related. Supply is low, with the chip at its heart having been made by T-Head itself in very limited quantities, and pre-orders have opened with just ten units available. Price, as a result, is high: The board and display bundle is priced at $399 plus a minimum of $31.06 shipping — $430.06 total, a hefty whack over the $99 of the Nezha.

Those looking to experiment with Linux on RISC-V can find the board up for pre-order on AliExpress now, with delivery expected in late October or early November; at the time of writing, seven units were still available.

Giving Snakes Their Mobility Back with a Set of Artificial Legs