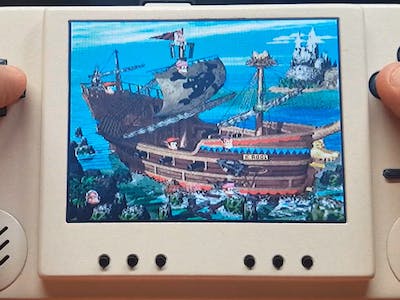 30 years ago, the Super Nintendo Entertainment System came onto the scene, providing enhanced graphics and more buttons when compared to the original. Like the original NES before it, games were largely restricted to a one-cartridge/one-game setup, and any “portable gaming” was a matter of unplugging it and taking it to a friend’s house.

Today, however, it’s possible to take one of these systems and “portable-ize” it into a handheld unit, stripping away unneeded components and adding a power source and screen. You can even buy a commercial version of such a system pre-built, or go the other way and emulate such a system using a Raspberry Pi. The problem with these two options is that either you are still restricted to a 1/1 game/cartridge ration in the case of the portable-ized device, or there may be some incompatibilities if you go the emulation route.

To get the best of both worlds, Downing of Downing’s Basement, created the SNES Box Go in 2018/2019. It uses hardware from both an SNES Jr., and the innards of an SD2NES cartridge, which allows him to load a plethora of games from an SD card. The device’s genuine Nintendo hardware is used to play the game for a non-emulated experience. Other components include two 3.7V 5000mA LiPo batteries and a 5 inch 4:3 screen, along with a variety of printed parts and custom PCBs.

Downing claims that it’s the only project he’s ever made that hasn’t been disassembled for parts, and he still plays it today. That being said, it’s price tag of around $600 to make, plus 100+ hours of design work (and other more easily available options) means this may be the only one of its kind in existence!

These Pico-Powered Smart Glasses Capture Images and Wirelessly Transmit Them