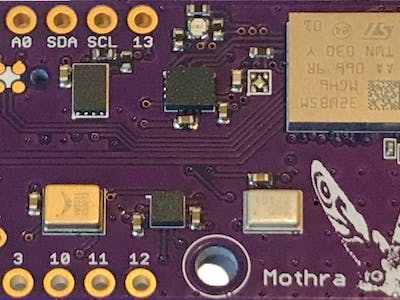 Many development boards feature a plethora of sensor types intended for prototyping an IoT device. Among those types are generally one sound sensor and one vibration sensor. Kris Winer, a one-person maker shop, is developing a purpose-specific sensor board containing multiple types of the same sensors. That board is Mothra, an acoustics laboratory on a stick.

The difference Mothra offers over traditional “all-in-one” sensor boards is that it only has two types of sensors: microphone and accelerometer. However, it has two of each, giving the board high sensitivity and offering very low-power sleep modes where either type of event can wake the microcontroller.

For the microcontroller module, Winer is using the STMicroelectronics BLE-enabled STM32WB. This module contains two microcontroller cores and a Bluetooth Low Energy radio. We hesitate to say “dual-core” because the cores are not at parity. One is an Arm Cortex-M0+ running at 32 MHz focused on BLE operations. While the other is an Arm Cortex-M4F running at 64 MHz and intended as the application processor. The module has 1 Mbyte flash, 256 kByte SRAM, and 68 GPIO pins. However, Mothra’s design uses 52 of those pins. The board breaks out eight digital I/O, two analog pins, and access to I2C.

Other than the sensors, Mothra also contains a microSD card slot, a QPSI NAND flash chip, an RGB LED, and a USB port for Arduino programming/debug.

For audio, the two sensors are an Invensense IC41350 PDM microphone and a VM3011 PDM microphone. The Invensense measures sound from 100 Hz up to 40 kHz! The STM32WB module does have hardware support for PDM filtering. Currently, Mothra does not take advantage of it, but Winer hopes to make it as simple as possible to extend into the ultrasonic range. The other sensor, the VM3011, can detect ambient noise changes and wake-up the microcontroller, which Winer calls wake-on detect sound.

Vibration detection happens with the STMicroelectronics IIS3DWB and Bosch BMA400 accelerometers. Like sound, they have different responsibilities. The IIS3DWB is a high-bandwidth three-axis accelerometer. In contrast, the BMA400 is a very low-power vibration sensor that provides wake-on detect vibration events.

Ultimately, Mothra should run efficiently from a small battery since its design favors ultra-low-power sleep. As of writing, Winer is still finalizing the design. For example, the current version of the PCB had a mistake with its LDO, which renders the NAND un-usable.

Mothra is still under development, so check out its project page for up-to-date news. The STM32WB is not new for Winer, however. We recently covered the Firefly, which uses the same microcontroller module.

15 thoughts on “Mothra Is an Acoustics Laboratory on a Stick”