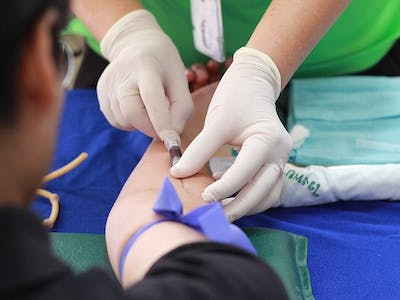 A pair of researchers at the Shri Ramdeobaba College of Engineering and Management (RCOEM) in Maharashtra have turned a Raspberry Pi into a portable, low-cost blood testing system — designed to bring on-site testing to rural areas.

“The development of a cost-efficient and sensitive platform for biochemical analysis of blood serum and its realization in the low resource areas is one of the imperative challenges to establish a robust healthcare ecosystem,” the team’s abstract explains of the problem being solved.

The solution: A portable and low-cost creation powered by a Raspberry Pi single-board computer, capable of automatically dispensing the required amount of chemical reagent into a blood sample and then analyzing the result using a light sensor — returning results, thanks to what the paper describes as the “huge processing capability” of the Raspberry Pi, in around 30 seconds.

“The developed platform offers the advantages of automation, low cost, portability, simple instrumentation, flexibility, and an easily accessible interface,” says Sangeeta Palekar, first author of the work, in an interview with IEEE Spectrum.

“Overall, the proposed framework is an attractive solution to be incorporated in the low resource area as a universal platform for all biochemistry analysis simply by varying the wavelength of light and reagent.”

The researchers praised the “huge processing capability” of the Raspberry Pi. (📷: Gareth Halfacree)

The low-cost analyzer’s results agreed with those of a far more costly lab-based system, which would typically require samples gathered in rural areas to be sent away for analysis. Using the Raspberry Pi-powered version, by contrast, means the samples can be quickly processed on-site without delay or risk of spoilage or loss in transit.

The team’s work has been published in the IEEE Sensors Journal under closed-access terms. The design files and source codes have not been released publicly.

The Latest Board From @SolderParty Gets Our Stamp of Approval!