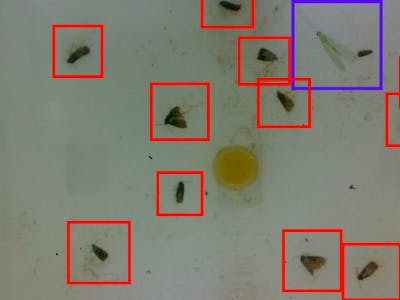 Crop damage resulting from pests can cause significant economic impact and disrupt the food chain. Rapidly identifying a problem can make the difference between a successful harvest and losing most of the crop.

A very clever, yet inexpensive and accessible solution was recently put forward by a group of researchers at the University of Trento. With some off-the-shelf hardware, they developed a device that can passively monitor pests present in an area, which provides farmers with an early alert system that allows them to intervene before problems get out of hand.

The device consists of a Raspberry Pi 3 to provide processing power for image acquisition and communication, and also to collect sensor data. A Sony IMX219 image sensor serves as the camera. An Intel Neural Compute module accelerates an onboard machine learning model, and a LoRa transceiver facilitates long-range communication. To keep the system running in the field, a solar panel is included to keep the battery topped off. On battery alone, the device can run for two to three months, so it is expected that the addition of the solar cell should allow it to operate indefinitely without maintenance.

These components are attached to a pheromone trap, which attracts, and then ensnares insects in the vicinity of the device. Twice daily, the system wakes up and snaps a picture of the insects caught in the trap. This image is sent off to a modified LeNet deep neural network for classification to determine which types of pests are present. It can then be determined if there are harmful insects present, which require the attention of the farmer. After each classification run, a report is sent off to the farmer via the LoRa modem.

The present implementation is only capable of detecting the Codling Moth. While this is a particularly destructive pest that can ravage entire apple orchards, they are certainly not a farmer’s only concern. Perhaps future revisions of this device will add the ability to detect a wider range of pests to enhance the value it provides to farmers.Insect classification (📷: A. Albanese et al.)

Tinyduino Is an Ultra-Compact Arduino-Compatible Development Board

Boost Your Carrier Board Capabilities with the Affordable MicroMod RP2040

The Sunny Future of AI